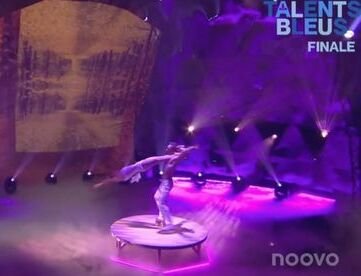 Of the four finalists in the Talents Bleus television competition during the program La Semaine des 4 Julie on Noovo, two are circus acts!

The duo Mathieu Cloutier and Myriam Lessard, both graduates of the École de cirque de Québec, will present their acrobatic roller skating duo act, which they have had the chance to perform in numerous cabarets in Europe and with Cirque du Soleil's BAZZAR show since its creation in 2016.

Marie-Christine Fournier and Louis-David Simoneau will present their fixed trapeze duet number to a song by Charlotte Cardin. It promises to be tender.

The Talents Bleus final will take place on Wednesday, April 7, at 9 p.m., and the public vote will determine the winner or winners that evening!

Watch the final live on Noovo.