Montréal Complètement Cirque, a great success: A look back at 11 days of excitement in the heart of the city 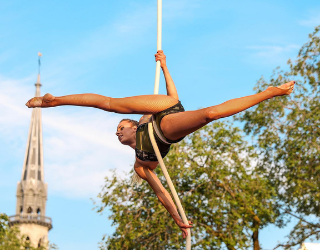 The festival has just finished and some shows have already been extended!

Despite the pandemic that hit our community hard and the health standards in force, the festival was successful. This year, it did not break a record for audience attendance, mainly due to distance and capacity restrictions, but most of the shows were sold out.

En Piste would like to congratulate the companies for their performances. After months of forced stoppage, the companies have taken up the challenge and come back stronger than ever to present their creations to the public, a real feat.

We would also like to highlight this success, which, along with others major events across Canada, definitely shows the recovery of activities. Supported by the Government of Quebec to the tune of $4 million, the festival shows just how important circus arts are for the development and cultural, economic and tourist vitality of a region. Thank you to La TOHU for bringing the circus arts to life and making the city vibrate.

On the strength of this success, the festival has also announced that two shows will be extended. Animal, by Cirque Alfonse, will be presented again from November 16 to 20, while Six°, by Flip Fabrique, will return to the stage from December 16 to 23 at TOHU. Tickets for these shows go on sale on 22 July.

We hope you were able to take part in the festivities and support the circus community, which is more ready than ever. Here are some highlights from the performances:

There were also surprise performances at La TOHU, festivities in rue Saint-Denis and strolls in the city's neighbourhoods...

Bravo and thank you all!